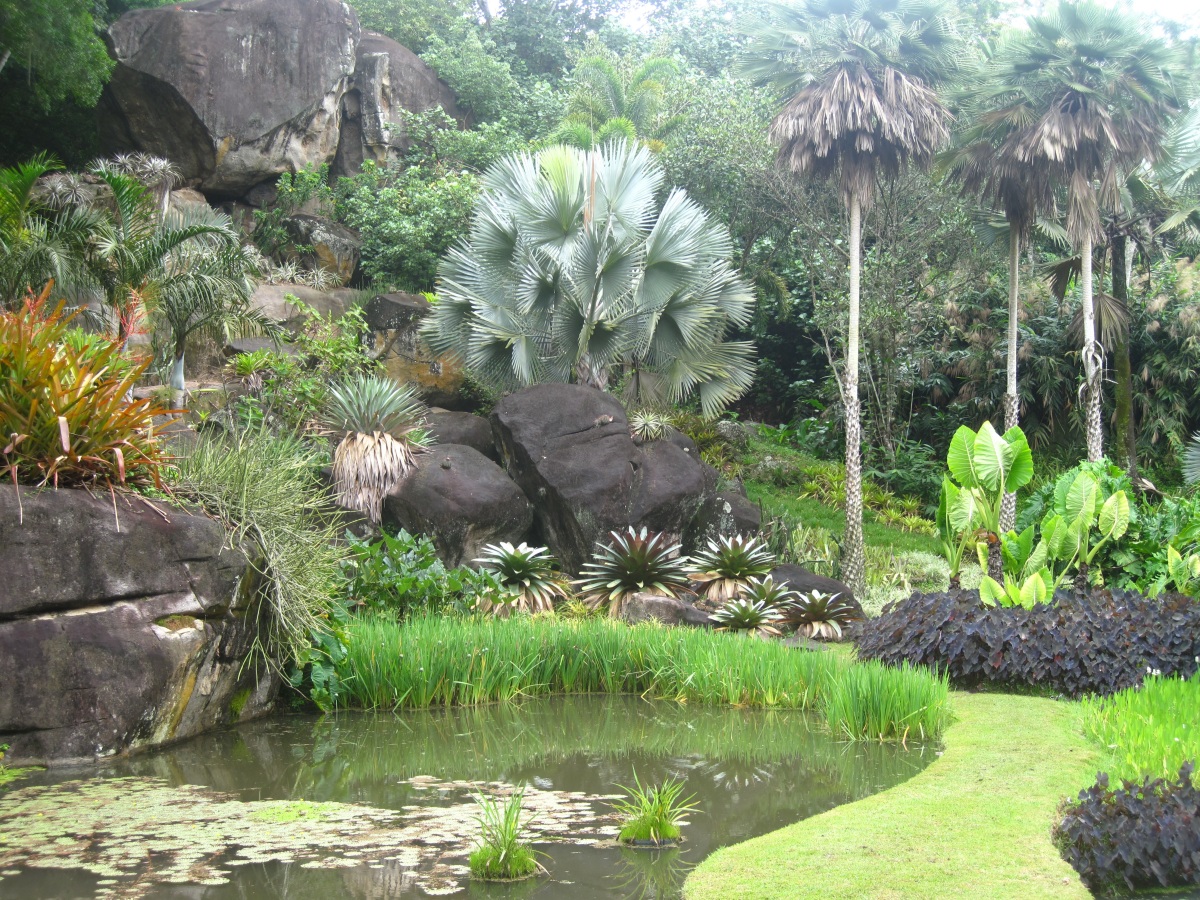 A kid in a candy shop was how my husband described me on a long overdue visit to the gardens of Burle Marx just outside Rio de Janeiro. Mr. Marx is most famous for designing the black and white, stone mosaic sidewalk of Copacabana beach in Rio de Janeiro, Brazil. As a landscape architect, he designed many famous public spaces in Brazil but he considered himself an artist first, then a botanist, then a landscape architect. This is evident in the garden which he lovingly evolved over 46 years, filling it with 3500 species of predominately native plants. 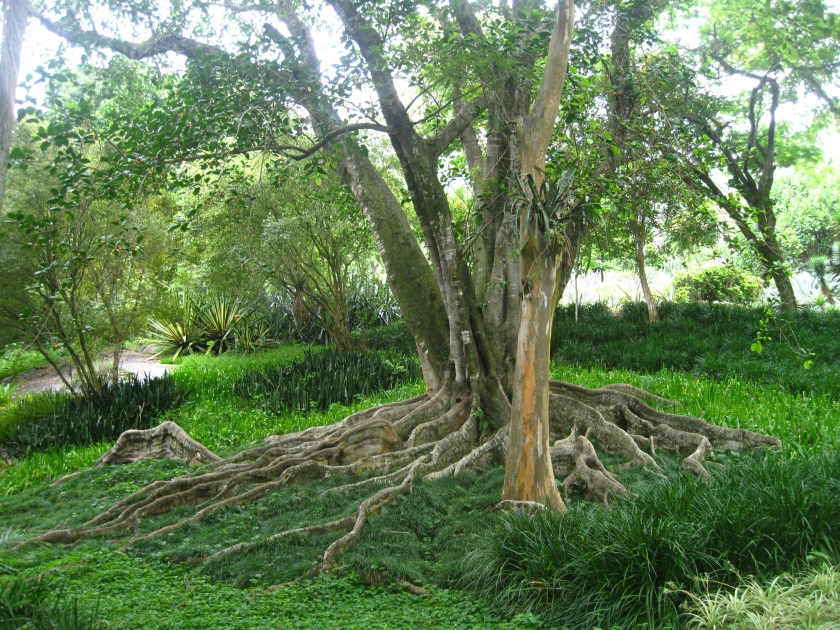 The roots of this 80 year old tree, refuse to be overlooked. They have risen above the ground to anchor the tree on the slope.There is no way Burle Marx could have planned the prominent role these roots would one day play… or did he?They are the first thing you notice upon beginning your tour of his gardens. 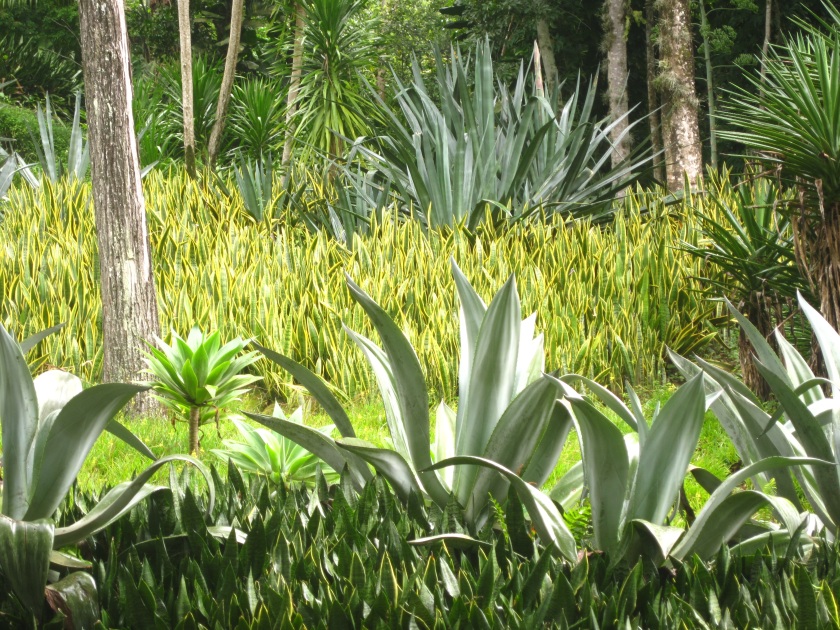 Sansevieria trifasciata (Snake plants) are used as a backdrop to emphasize the architectural shapes of the Agaves. 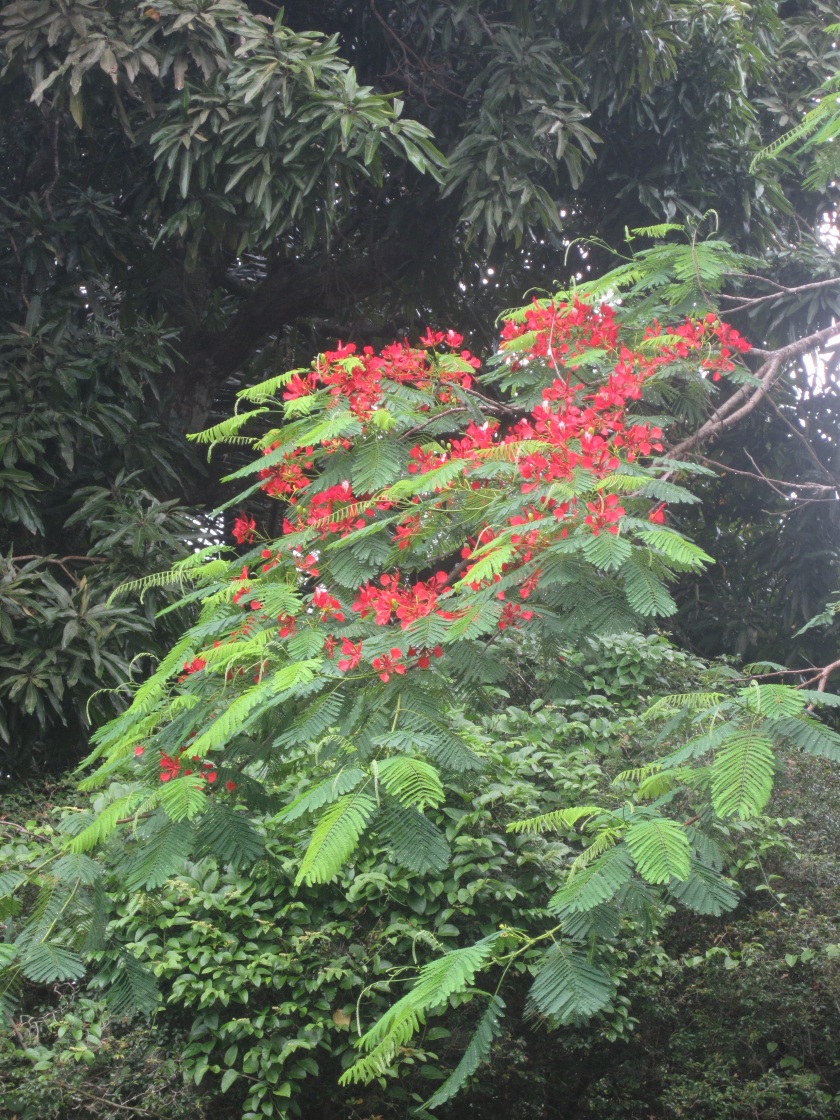 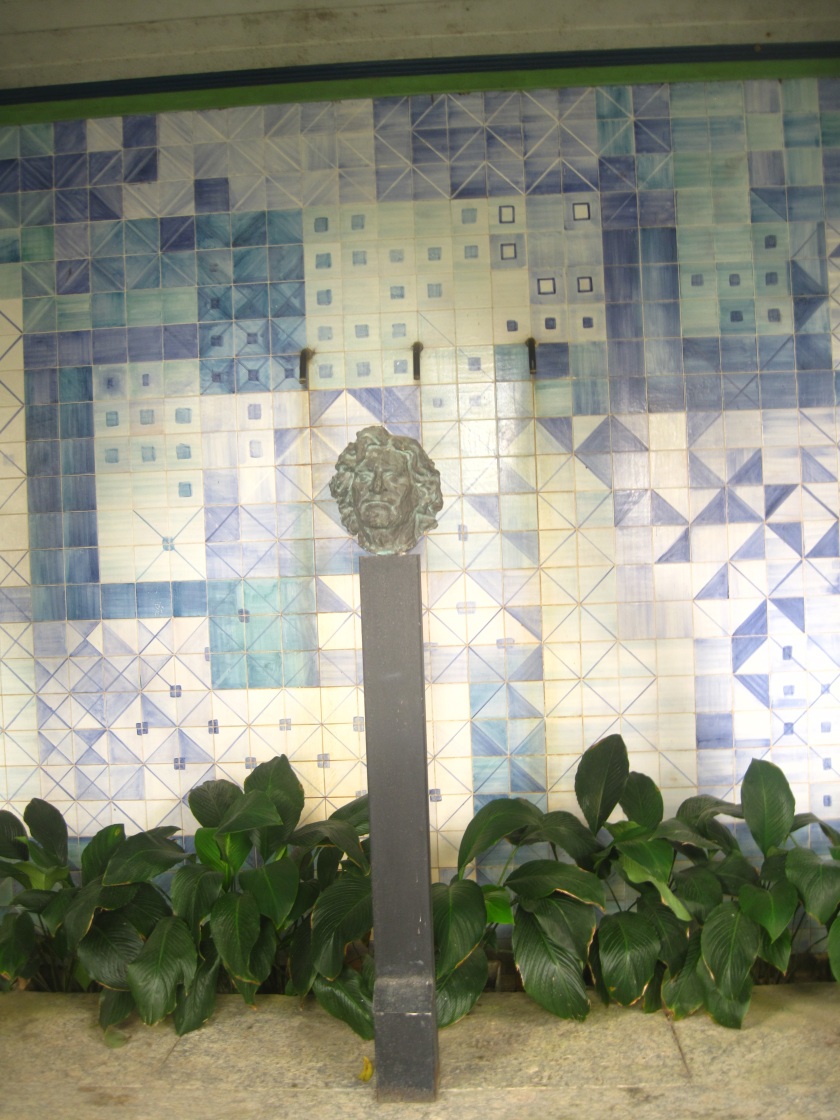 While studying painting in Berlin, the 18-year-old Burle Marx had an epiphany during a visit to the Berlin Botanical Gardens. There, he encountered beautiful plant species native to Brazil, and vowed that upon his return he would design gardens using native species instead of the imported plant materials favored by Brazilian landscape architects. In doing so, he revolutionized landscape design in Brazil, being on the leading edge of conservation, preservation and the utilization of native species. 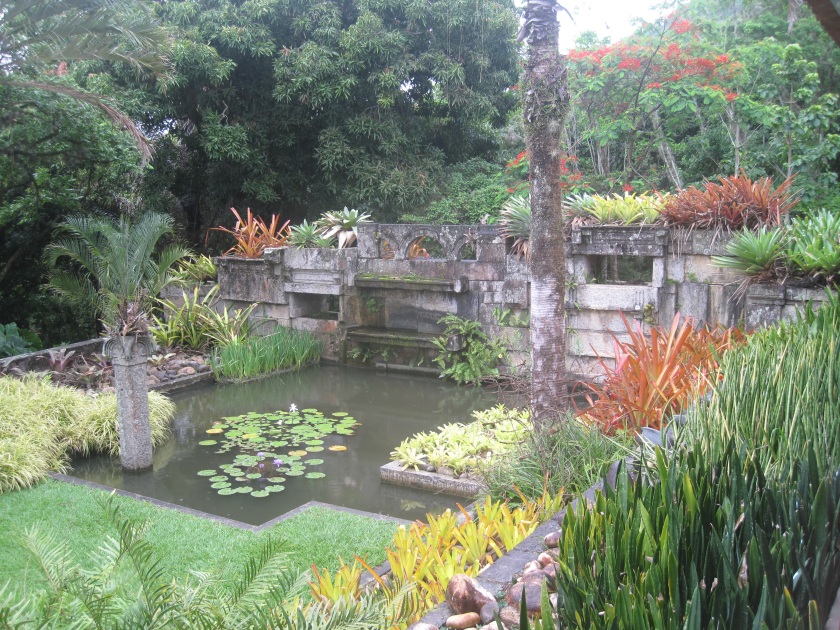 Other than the water lilies and the flowers on the Flamboyant tree in the background, this colorful water garden is composed entirely of foliage plants. 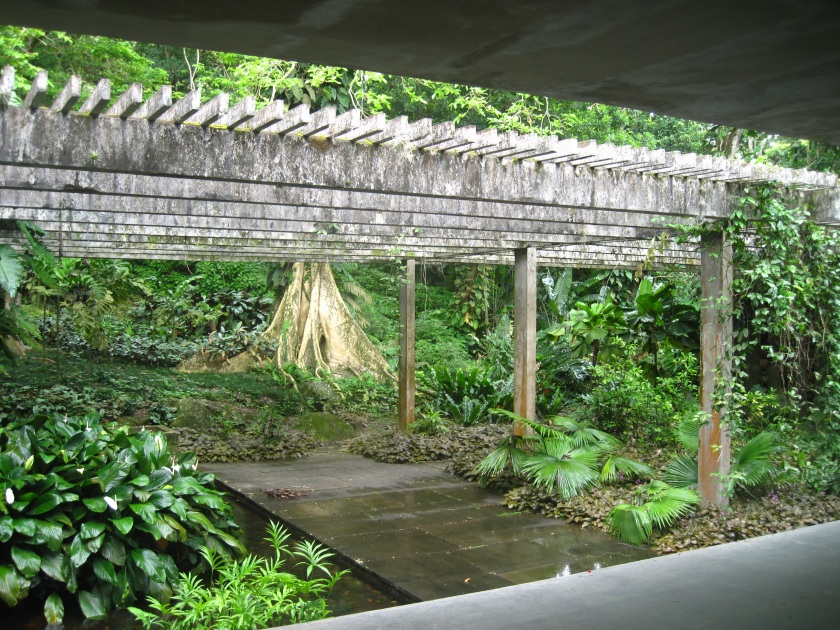 Burle Marx a man after my own heart, loved a good party and built this open air ‘party room’ behind his house at his ‘sitio’. This modern space is surrounded by a water feature, contains an open fireplace and was designed to frame the surrounding gardens. This particular view looks toward the root flare of a huge Ficus tree. 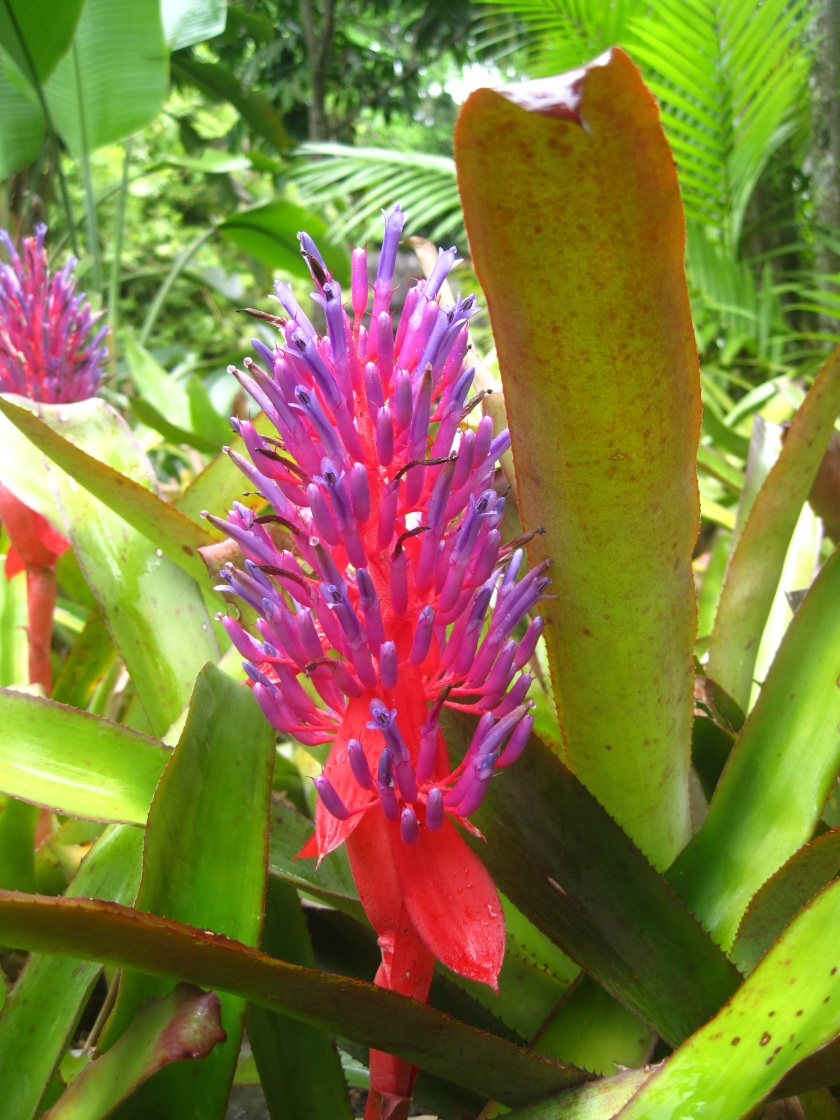 To think that prior to the influence of this wonderful artist, Brazilians imported Pines and Gladioli for their gardens instead of using ‘inferior’ local species. 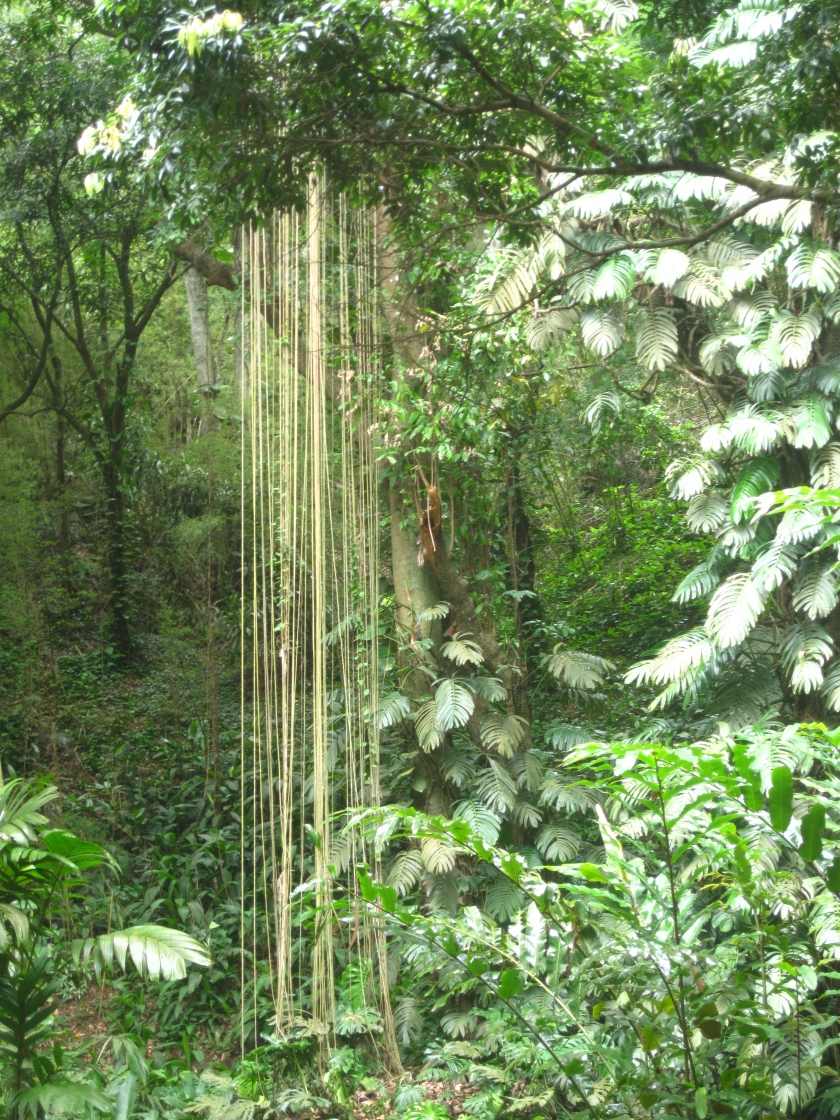 The roots of this Philodendron plant growing in the canopy of a tree, spill down to the ground creating a surreal waterfall. Philodendrons begin life in the canopy of trees, then send aerial roots to the forest floor where they can uptake their nutrients. Burle Marx was a master at his craft, but Mother Nature invented good design by combining beauty and function. 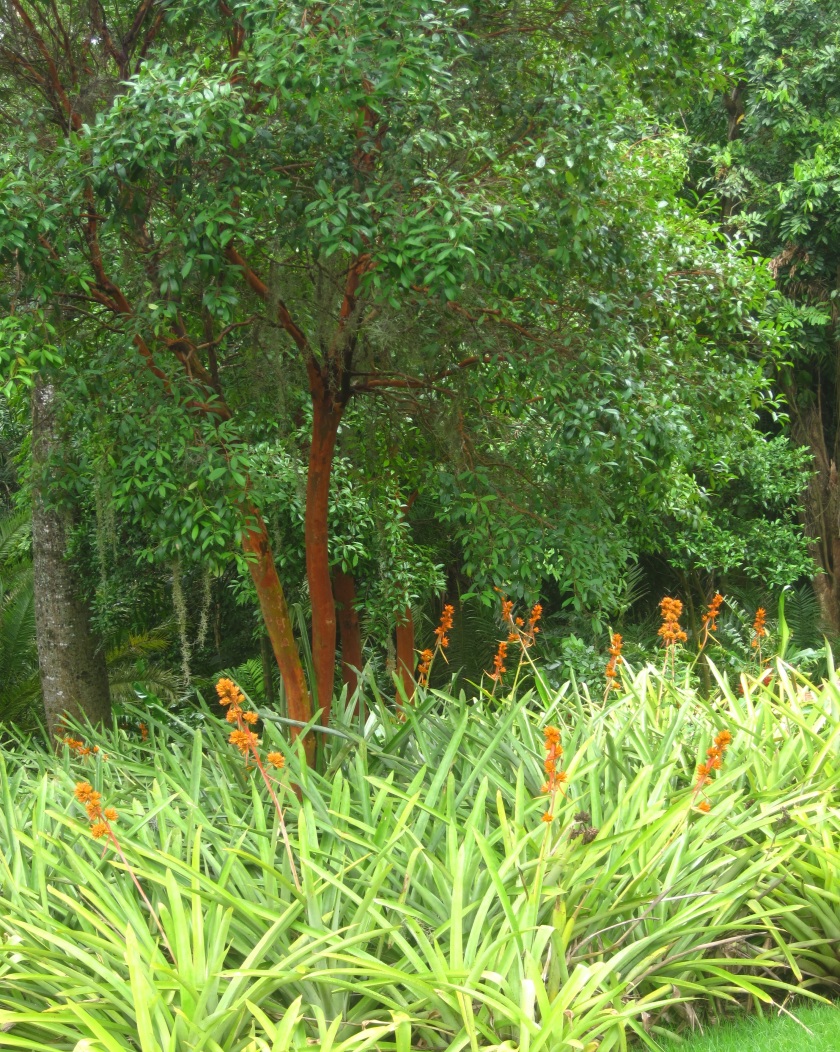 Design magic! Pairing the flowers of these Bromeliads with the similar colored bark on this (unknown to me) tree. 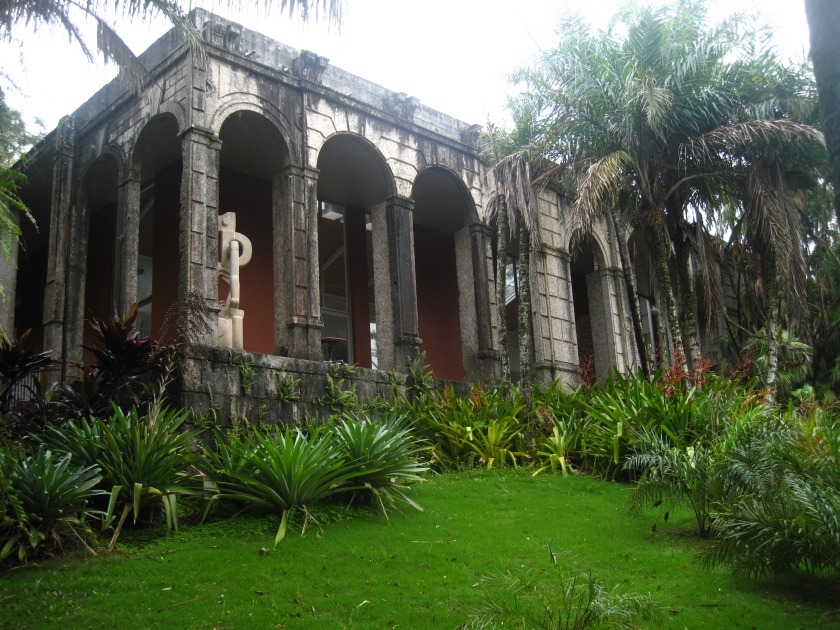 This XVIII century logia was disassembled from the center of Rio de Janeiro and reassembled at the ‘sitio’ in 1990. It fronts a contemporary building Mr. Marx planned, to use as his art studio. He began this project at 80 years old and unfortunately didn’t live to see it’s completion. He died at 84 years of age. 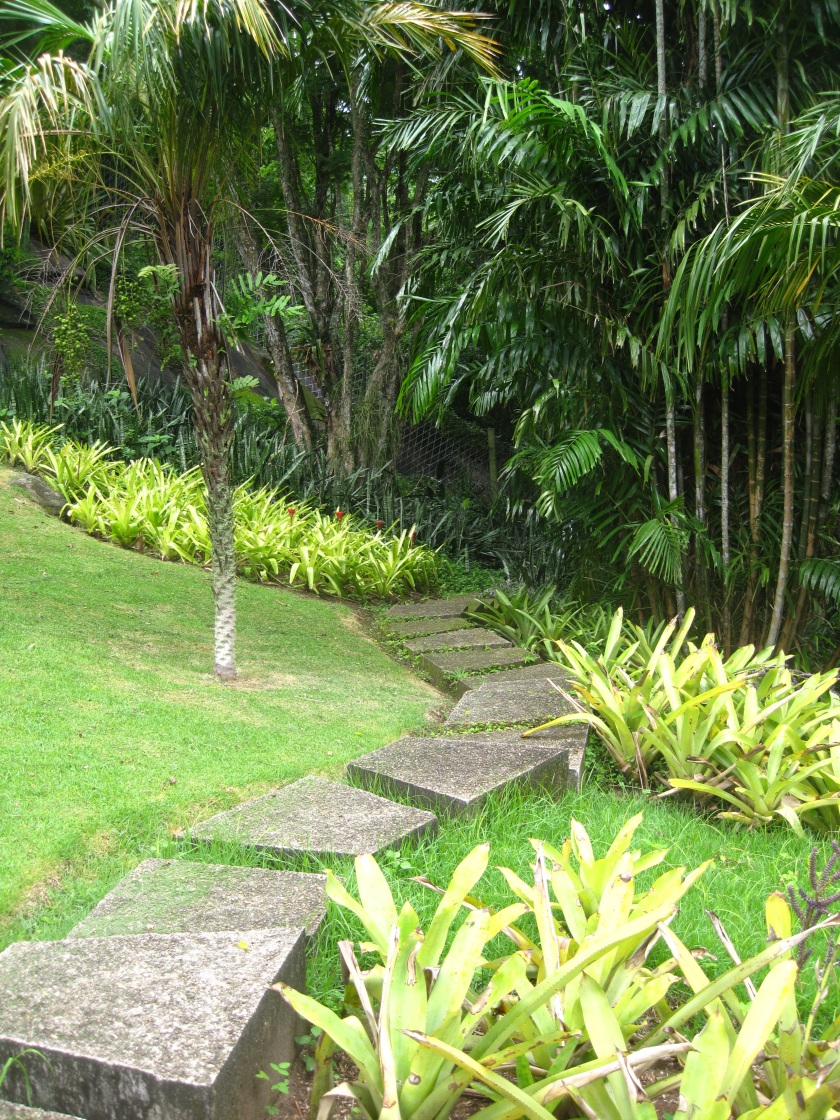 Not for the faint of foot (and a total liability nightmare in North America), theTrilha Trapézio footpath, consists of irregular shaped and sized stepping-stones, descending to the Rock and Pond area of the garden through swaths of Bromeliads and Heliconias. 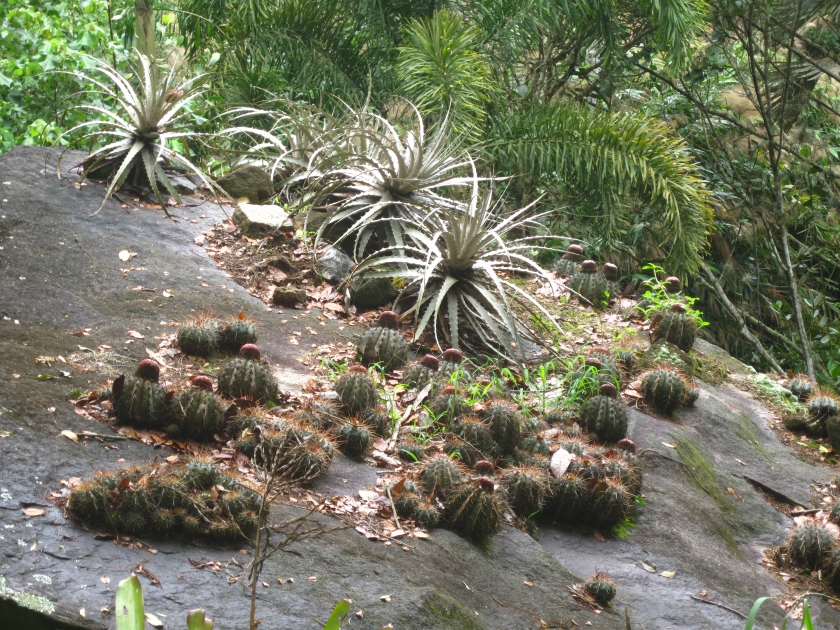 You might not be able to get blood from a stone, but it can sustain life!

A repeating theme at the ‘sitio’ (farm), Mr. Marx liked to have ‘floating’ gardens in his water features. Some had pillars rising out of the water supporting planted containers, these ponds contain ‘islands’ of palm trees.

I hope no one gets offended that I have wandered off the Gardens path. The Halifax Public Gardens hold a special place in my heart and I endeavor to keep it prominent  in the conscience of Haligonians and all lovers of gardens. This garden also holds a special place in my Brazilian heart. I’m proud of the work that Mr. Marx devoted his life to and elated that he donated his ‘sitio’ to the Brazilian government so that it would be preserved for future generations.  I salute all efforts to maintain and preserve these beautiful spaces so that we can continually be connected and inspired by the wonders of nature.

2 thoughts on “Off the Gardens path we go….at least while our beloved Public Gardens are asleep.”